I ended last weekend with a second place ribbon and a black eye.

We were able to school cross country after the CT on Saturday and on Sunday afternoon as well. Saturday was fabulous! We did up and down banks (in the “water” complex, which was without water), a ditch to a coop, the whole back half of BN course and also a bunch of Novice fences, too. My parents and fiance were there to watch and take pictures and videos (thanks guys!). It was their first experience seeing any sort of cross country riding and by the end my dad said he wished he could still rode and could try it, too. You’re never too old, Dad! Get back on that horse!

This pic makes me laugh every time 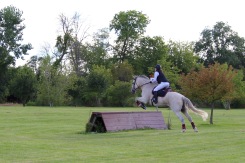 Sunday was even better! The water complex had been filled with actual water, so we got to school the banks with the added question of going into or out of water. That was a cool way to build on our rides from yesterday and educate the horses. And we got to do some Training level questions! The coop dropping into the water, a fun up bank-one stride-up bank-three strides-skinny combination, in and out of the woods, and a ditch. We even tried a Weldon’s Wall but Stryder was like, “whoa, lady, I don’t know about this one” and so we didn’t push it. Toward the end, we practiced the Novice ditch-to-coop, then did it the other way and did coop-to-ditch, and then put it all together and did the Training level coffin complex and it was the COOLEST. 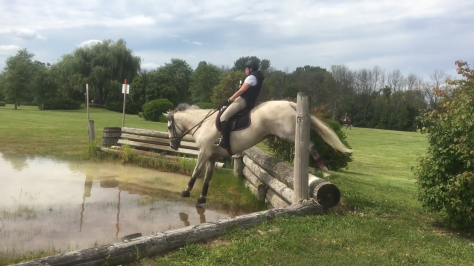 But you guys want to know about the black eye. FINE. At one point, Trainer B sent Stryder and me off to run the first half of the BN course in order. I’ve never walked the course so I was winging it. We made it through fence 6 easily, then I couldn’t find fence 7 because the jump number was blocked behind a bushy tree. I passed the jump, saw it was 7, and went to circle back around a big tree. Past this big tree was another tree…and another, and another and I soon realized I had accidentally ridden directly into a grove of trees and there was no way out but through. I ducked, thinking Stryder, take the wheel! He did. We got out but I took a branch to the eye.

I kept riding, did fence 7-13 and rode back to our group. First words out of my mouth: “Am I bleeding?” Yes, yes I was. Not badly. Not enough to stop riding. In fact, we went on to do the coffin complex shortly thereafter. But I do have some nice red welts and a bruise.