Well, the good news is that after this weekend, the only way to go is up.

Long story short is that Husky threw me. In our first class. Which was on the flat. Like the last time – and the time before that – I landed mostly on my lower back. This time I also managed to somehow smack my nose, probably on the visor of my helmet. I also held onto the reins a hair too long, so I ended up with sore muscles in my arm, neck, side, back and thigh. Did I mention that Husky trotted off to the gate so I had to walk almost the entire length of the arena while everyone halted and waited?

Oh, yeah. And I landed in poop.

I got back to the gate, where Leanne had ahold of Husky. The medic checked me out and cleared me with instructions to sit down and rest for awhile. Thankfully we had a loooooong break until our next two classes. During this time, Madi and Kimmie showed on Cinnamon and Twinkle, respectively. They did great! Madi even got Grand Champion in her division! It was so fun to watch. It’s so great because several other people from the farm usually come out to watch the shows. It makes for a super fun day of hanging out and horsing around. (Ha.) Plus, the weather was perfectly beautiful – sunny, warm and not humid.

Here are some photos from Day 1 of the show. The picture of me and Husky was taken before we parted ways. Can we just note how white he is? No yellow spots. (Thanks to Shapley’s and chalk, even his face and permanently-yellow knees look white!) 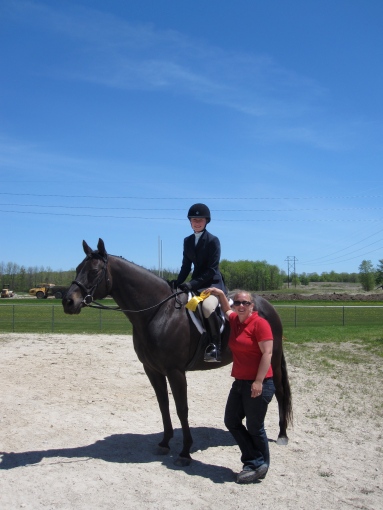 Husky and I had a good warm-up before our next classes. He felt relaxed and I thought we’d be on a good page. The woman who does the acupressure on a lot of horses at the farm was there to watch the team, and she was kind enough to do some work on Husky’s shoulders. Plus, the day before, we’d warmed up in both of the two rings where classes were held. He was fabulous in Ring 2, and had thrown a couple weird buck/spins in Ring 1 – which was where he’d thrown me in our first class. We were about to head into Ring 2 for the next classes and I was feeling good. I figured everything was going in our favor.

So, into the ring we went. It was clear right away that Husky was keyed up…and that made me feel keyed up. I just decided we’d go slow and easy. It didn’t work so well. I ended up just holding him on a tight rein and half-halting almost every stride. But I was afraid that if I let him move out, he would have gotten away from me and thrown his head down again. I needn’t have worried; he bucked anyway. And I got scared. I could feel my back pinging after that, reminding me that if I came off again, it was going to hurt a lot. Needless to say, we didn’t place.

Right after that we had our hunter under saddle class, and I thought about scratching. I was really scared. I didn’t want to come off again, period. And Husky was actually trying to get me off. These bucks weren’t the average wind-up-the-butt bucks. They were very sudden slam-the-front-feet-into-the-ground-for-maximum-leverage, get-off-my-back-now bucks, often accompanied by a grunt or a squeal. And I didn’t want to come off again. I just didn’t.

So I took a deep breath and tried a different tactic by letting Husky move out. He felt good at the trot, really moving out and stretching down. I just kept my heels down and prepared myself for the next buck. Who knows, by anticipating it, I could have contributed to it happening. Anyway, he bucked again at the canter. I stayed on and thought about going in the middle and stopping. We finished the class, and didn’t place (duh).

I was really shaken – and shaking, literally – after I got off. Husky is normally my steady guy who doesn’t get too bothered by stuff. It had become clear that his shoulder was bothering him a lot more than we had originally thought. We scratched from our last class. And with that, Day 1 was over (and the show was over for Husky and me).

Like I said, we can only improve from that.

Day 2 was a lot of fun, just hanging out, watching and helping the other girls. I wore shorts for the first time this year! Madi and Kimmie each had ups and downs in their classes but overall they both did fabulous and had positive experiences for the weekend. Kimmie ended up winning her flat class after getting refusals in her over fences classes, which was a fun and rather fabulous comeback. 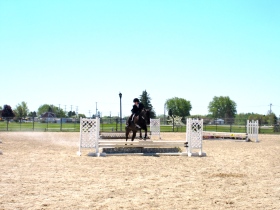 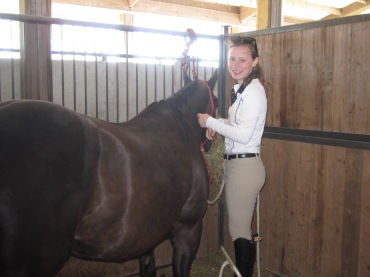 Overall, it was a good weekend. We had a lot of fun, some low moments, and a lot of fantastic team support. That’s part of what I love so much about the show team – everyone is there to help each other, whether it’s helping bump up braids when you are running late from getting lost on the way to the show grounds (thanks, Kimmie), or offering words of support and encouragement. It’s such a great group of people, and we all just want our teammates to do their best. It’s pretty fabulous.

9 thoughts on “The Only Way Onward is Upward”