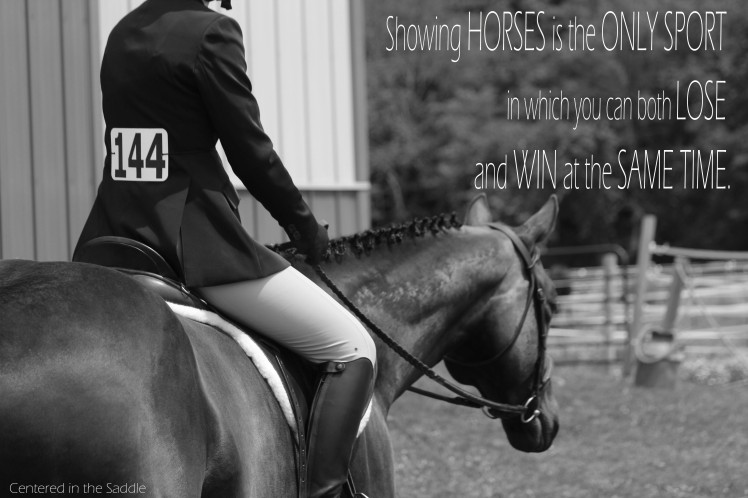 If you show horses, whatever your discipline, then you’ve probably experienced that moment when you realize that it’s basically a futile endeavor. No matter what you do, no matter how perfect your ride, the results essentially rely on one person’s opinion. It is the nature of the sport.

It takes a certain kind of crazy to continue in this sport, even on a pretty casual level. Think about it: you get up hours before the sun to braid your horse’s mane and tail, possibly trailer them to the show that morning, haul 500 pounds of stuff into the barn, school before the warmup ring closes, make sure your horse is spotless, make sure you yourself are spotless, wait around for hours, then get on and compete for about 20 minutes, spend hundreds of dollars and then undo everything you worked so hard on (other than the spending money part) and go home. You may repeat some of these steps a few times if it’s a multi-day show.

The point is, you have literally no control over the results of the class. All you can do is work your butt off and leave it all on the arena dirt every time you enter the ring (figuratively). But sometimes even that won’t be enough.

So what is a poor equestrian to do?

Let me tell you a story. Once upon a time, long, long ago…all the way back in early August 2014, in rural Wisconsin…

There was a girl, number 159, and her equine partner, Admiral, ready to take the 2’3″ classes by storm. Since their previous show, the team had worked successfully on getting proper striding between fences, and landing on the correct leads. 159 was confident and excited. 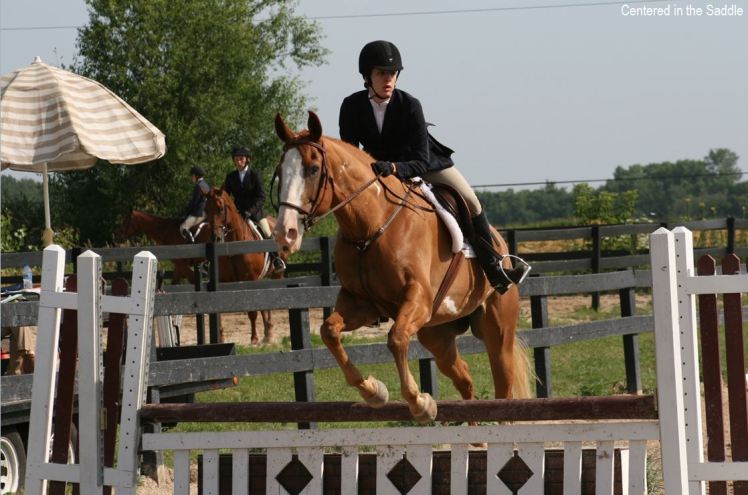 Their first classes were in the Baby Green Division (which, incidentally, 159 thinks is a silly name for a division, but that’s another story). There were eight other riders in the over-fences classes and all were worthy competitors. 159 and Admiral entered the ring and had a lovely round, with almost all the right leads and almost all the right striding. The second round was even better, and the third and final round even better still!

They came away with a third place and two fourth places. But Number 159 wasn’t very happy. She wasn’t upset, but she wanted more! So she went into the flat class confidently, expecting to do well. The class was a respectable group of seven riders. 159 had a lovely ride and felt confident she would do fairly well.

The announcer called out the number for first place…second place..third…and not until seventh place was 159 called. Dead last.

“I’m disappointed,” she confided in her friends and trainer later. “You know me – I don’t really care about the ribbons – but I’m disappointed with last place.” It was agreed that it was, indeed, a bummer and a disappointment, and not strictly deserved. But in a class of good horses, when no one makes a catastrophic mistake, it’s purely based on the judge’s opinion.

The next day, 159 returned for equitation classes and was feeling more cheerful. Surely today she would do well! Even if the judge didn’t think trusty Admiral was a hunter type, certainly being judged on her equitation would lead to more success. And the medal class was another opportunity for fun and to shine!

159 rode her classes and felt good about them. No, not every lead was perfect, but every line had the right number of strides and her approaches came in at good distances. In the medal class, though it was fun, she nearly steered Admiral over the wrong jump! But – bless him – he listened to her last-minute, panicked cues and dodged out of it’s way to take an awkward line over the right jump.

At the end of the day, 159 placed in none of her classes.

She felt frustrated. She felt some ill will toward the judge who didn’t like her riding or her horse. What more could she do? Her frustration was only compounded by the fact that her last show, only weeks earlier, had been one of the most wonderful experiences of her life – even though she didn’t place very well! So what was going on?

That night, 159 realized that she had had expectations going into the show. She expected to do well. She had worked with Admiral on striding and leads. They had done well with both at home. 159 expected that the judge would place them well.

And then she realized, expectations are the death of a “good” show. The judge owes you nothing. The judge doesn’t know you, doesn’t know how hard you’ve worked or how far you’ve come. The only thing the judge sees (or doesn’t see) is what is right in front of her eyes that day. So don’t put all the success criteria into the proverbial ribbon basket. Don’t make it personal.

Actually, do. Make the show completely personal. Here’s lookin’ at you, kid. The judge doesn’t know you, doesn’t know how hard you’ve worked or how far you’ve come. But you do. You know.

This is one of the most difficult things to describe to people outside of the horse world. When asked how the show went by a non-horsey friend or coworker, it may seem strange to them if you say, “It was so great! We barely placed at all but I was still so happy because we got all of our striding right.” You can practically see their eyes glazing over with every word. It would be far easier to be able to say, “It was so great! We won all the blue ribbons!”

It’s also easy to say, “my horse isn’t type-y” or “the judge doesn’t like my horse” – and it might even be true. But that doesn’t mean it’s a reason to stop giving your all. At some point you’ll run across a judge who does like your horse. But more important than that is that the partnership with your horse requires you to give your all. You owe it to that relationship to detach from the ultimately arbitrary placings any sense of your own or your horse’s worth.

It’s amazing really. When you focus only on your own personal successes, and forget about the judge – or, as my wonderful trainer said on day 3 of the show, “ride like you’re giving the middle finger to the judge” – everything becomes fun again.

Oh, and on day 3, 159 got two sixth place ribbons out of a class of twelve – one in a hunter over fences class, and one in the hunter classic. And trust me, she was pretty dang happy with that. 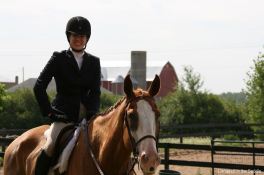 What do you think about judges and tough shows?
How do you approach horse shows with a positive attitude?

6 thoughts on “Winning & Losing: You Know Something the Judge Doesn’t”