It has been two years since I started working with a wiggly, distracted baby named Drifter. And almost exactly two years to the day since he weighed in for the first time. He hasn’t said too much lately. I’ll have to talk to him about that.

WHAT IS OVER THERE?

Height: 15.2 hh at the withers, 15.3 1/2 hh at the hip
Notes: He has such a pencil neck. And he has a block head. Not like he’s an idiot, but like his head looks like a giant block hanging off the end of a long skinny neck. Not much muscle, and of course he was pretty unbalanced. You’ll notice that it was difficult to get him to stand somewhat square for photos.

Height: 16 1/2 hh
Notes: Filling out somewhat and getting taller. This was about the time when I stopped riding Twinkle and devoted all of my attention to Drifter. He stood a bit better for photos. Still so skinny and gangly! Like all his parts haven’t quite fit together all the way (which, of course, they hadn’t yet). 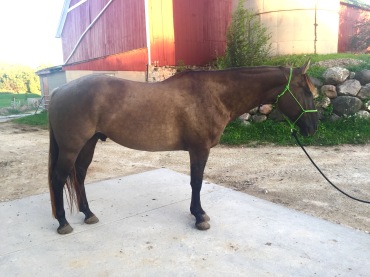 Height: 16.1 hh
Notes: He has put on so much more muscle! No more pencil neck. His head looks like it is proportional to his body (finally!). That shoulder and especially his hip/stifle looks so much more filled out. His back looks stronger. And he’s also standing up straight, not leaning forward over his front legs. Self-carriage for the win! Also: he didn’t even try to take a step to get the grass that I was dangling in front of him (and that you can see in the second picture), so his standing for photos has improved greatly. As have my conformation-picture-taking skills.

I love having a record over the past few years of our milestones. How much has changed! 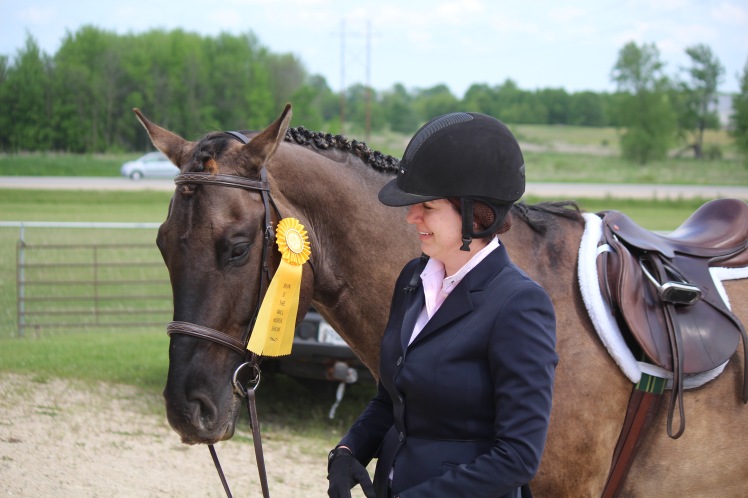 Recently, I posted about struggles that we’ve gone through together. Although I’ve been feeling much more positive lately, it still helps to look back to September 2014 when this horse only had basic training on him and had been sitting in a field for quite a while. He was pure potential. And over the past two years, we’ve truly built a partnership based on trust, hard work and a sense of humor.

I realized something as I wrote that last sentence. I think Drifter and I have similar personalities. (Is it weird to compare yourself to a horse? No, right?) Both of us can be quiet or reserved upon first meeting someone, but over time we both open up and show that we have a silly side, and a sweet side, and a stubborn side. We both tend to hide anxiety or frustration. Sometimes, that doesn’t work out so well for us. But usually, we work well together. There’s a little silliness thrown in there – like a squeal during an “expressive” lead change that makes me giggle – and plenty of sweetness. My heart gets gooey every time I dismount and he turns to say “good job” with a quiet nicker. (Seriously. If we have a not-so-great ride, no nickers for me.)

As we leave for our last big show of the year tomorrow, I am going to keep this in mind: It will be a celebration of our progress and accomplishments over a relatively short period of time. After all, we have come so far in just two years. And that’s something to be proud of.

5 thoughts on “Drifter’s Diary: 2 Years Together”