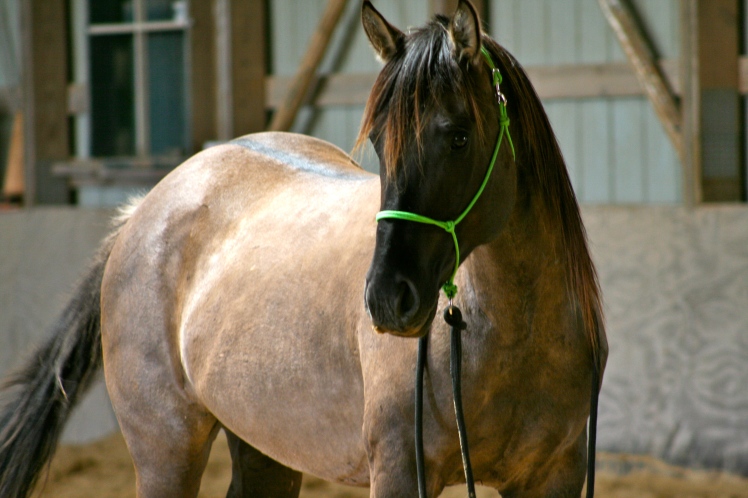 Last week, Twinkle had a visit from the chiropractor, so I rode Drifter in my lesson. Usually we either jump or work on fairly advanced stuff since the lesson is a group of older competitive riders, so I was both excited and slightly nervous about riding Drifter in that environment. But I was mostly looking forward to it because I had been wanting to take a lesson on him for awhile.

Pretty much right away, Leanne said we’d be jumping Drifter a little bit, and I was so excited! This would be my first time ever jumping him! He had jumped a little bit when Leanne was working with him last spring, but nothing since then. He was warming up well, although a little slow. The weather has finally gotten hot and humid, but neither horses nor people are quite used to working in the heat yet.

Long story short, he was great! He was super calm and unfazed by everything the whole time. I learned a new tool for getting his attention when he gets distracted or tries to look out the door or window in the arena – get control of his hip. It’s not really a new tool, since I’ve discussed the importance of controlling the inside hind before but it was a lightbulb moment for both me and Drifter.

Anyway, we started out going over groundpoles and making Drifter respect my leg, since he was pretty content to chug along at a consistent-and-relaxed-but-too-slow pace. I’ve ridden over ground poles with him a lot, and the first few times he’s always kind of like, whoa! What are these strange things attached to my legs, and how do I use them to go over these obstacles that are in the way? He’s not the most graceful right out of the gate, but he’s young. He figures himself out after a bit.

It was the same with jumping. We jumped a little 4-stride line, first crossrails and then little verticals that I think were about 12 inches…basically cavalettis. The first few times he would try to jump but end up sort of crashing through or trip over one or both of the jumps. The wonderful thing was that his anxiety level never came up. He just sort of kept going along steadily and wasn’t too fussed by anything. He never really questioned trying again after hitting the rails, never stopped, never offered any sort of buck or bolt. He did get pretty wiggly, which we need to fix (and I’ve already started by riding him straight on the quarter lines instead of on the rail all the time). But he was never upset or worried.

It was great. We were both relaxed and having fun, and so I could focus on making Drifter feel successful and confident without either of us having any fear or anxiety. He was so relaxed, in fact, that Leanne mentioned that she hopes he’ll learn from his mistakes and get to be a little more careful. I think he will. By the end we had a few times through that were steady, calm, forward and clear.

I’m so excited about this horse!

Do you remember the first time you jumped your horse? Have you ever started a young horse over fences?

7 thoughts on “That Time I Jumped Drifter”