Oh my gosh, guys. In my most recent lesson on Drifter, we jumped for real! Not just cavalettis or even a single small jump; they were real, honest jumps!

It was nice enough to ride outside, so our trainer, Leanne, wanted to have us experiment with going over the colorful, “spookier” jumps set up out there. She set three super low to start and we trotted over. Drifter pretty much just went right over everything, though he looked at things a little bit the first time. The jumps were set in such a way that we did about 6-7 strides on a bending line between each, so we made a large oval shape.

We quickly progressed to cantering the small jumps. No problem. Well, I’m a bit of a problem in that I’m over-riding him and essentially throwing my upper body on his neck. I thought I had pretty much gotten over that bad habit with Twinkle. *Ugh.* Note to self: Don’t anticipate, and stay out of Drifter’s way so he can figure it out.

Anyway. Other than my annoying bad habit cropping back up, I was thrilled with the ride. Leanne kept bumping up the jumps a bit more and bit more, and it was such a blast. Drifter popped right over everything, no problem. He even changed his lead over the fence when we did changed directions. [Happy dance!] 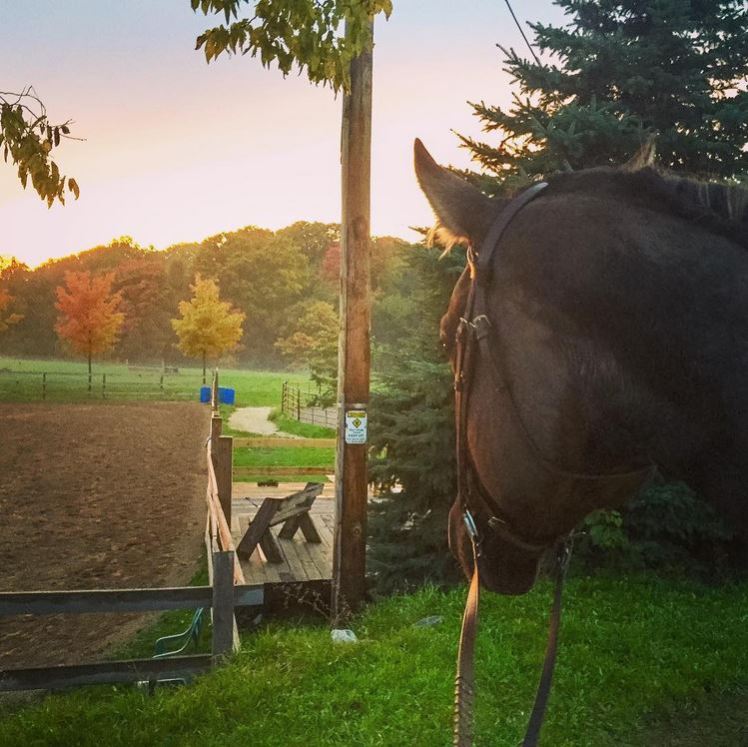 The main thing he still needs to figure out are lines. He doesn’t blink at single fences, but you put him in a straight line and he gets really wiggly in between and slows down a lot. He managed to get five strides in a three-stride line at one point. To be fair, the second fence likely looked the scariest, with big white diamonds on a dark green background. Since horses primarily see in contrasts, it could be that it looked rather intimidating to him. The best part? He didn’t stop! He may not have been straight, but he went right over.

That seems to be his M.O. He doesn’t get too ruffled by anything, whether a goofy distance or a hard knock. (He ended with green paint on his front hooves from a particularly hard rail.) Actually, I hope he starts caring a little bit more about knocking rails…sometimes he’ll take one down three times before he figures out to pick up his feet a bit more.

By the end, Leanne bumped up a single fence to about 2’4″. The first time, Drifter knocked the rail off. The second time he sailed over like a pro! 2’4′ you guys! This is a horse that has barely begun jumping. In perspective, Twinkle (bless her heart for all she taught me) was only comfortable showing at 2’3″, though we worked up to 3′ at home, and she’s been jumping and showing for years.

Drifter seems to like jumping so far. He’s turning into a brave, bold guy, and he certainly gives it his focus, whereas on the flat he can be a bit distracted while going through the motions. Hopefully he’ll take to jumping even more and have fun with this as his job.

What a cool horse.

4 thoughts on “That Time I Jumped Drifter (Again)”