The title of this post may be a tad dramatic. The gymnastic exercise we did was a ton of fun, but it was deceptively tricky. However, no one died. I was riding Artie again, and he is just a gem!

Here is the general, not-to-scale, quick PowerPoint edition of the jumps: 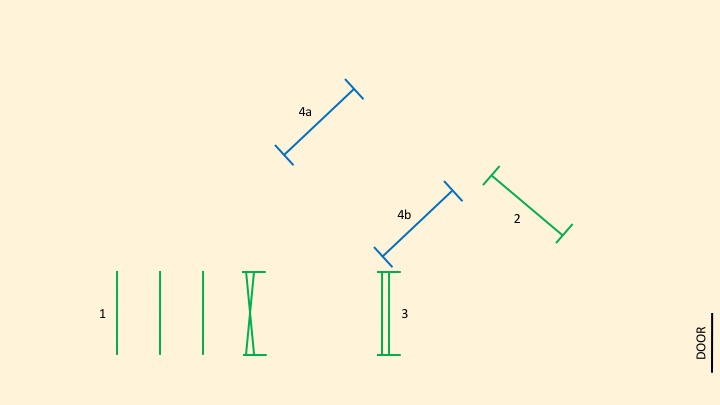 It doesn’t look so hard, right? And it wasn’t at first. We did the grid on its own first, starting with trot poles (by #1 on the diagram) and trotting into the two-stride, then halting at the door. Pretty straightforward, even when the trot poles became canter poles.

Then we added jump 2 into the mix, a bending three strides from the oxer at the end of the grid. For some reason getting this in a smooth three was tough for me. I was a little bit all over the place, and I think that made me tighten up a bit over the oxer and not follow enough. But we managed to get it after a couple of tries.

Then things started getting really interesting. We would do the grid bending to the vertical, then come around the end of the arena and do the grid, backward. This exercise forces you to be sharp, clear and very stable in your position to regulate the stride length and direction.

It was really challenging but I loved it! It forced me to keep thinking and ride more actively, especially as the jumps got a bit higher. It also helped drive home that things go more smoothly when I sit up and keep my darn shoulders back. If I got sloppy, things started falling apart quickly. Artie, as previously stated, is a gem. He’s game for anything, tries hard, and can really turn and burn around those corners!

What are your favorite gymnastic exercises?

2 thoughts on “The Grid of Death”