Alternate title: How to vastly underestimate how long it takes to dig a ditch by hand in the middle of a heat wave.

When my friend/eventing teammate, M, got the green light to build some new cross country fences in the jump field, it immediately set off a frenzy of Pinning awesome jumps we could create. In the end, we decided to build a Weldon’s Wall, a coffin complex made of two skinnies and a ditch, and a Trakehner, so that we’d have some questions that are closer to Training level to practice with at home. We picked the 4th of July as our day to build, when we would be off work and could drag our significant others along to help.*

We thought we could build all of these in one day. Ah, how naive we were.

The barn owner graciously gave permission for us to dig actual ditches. M and I figured we’d be able to dig those out while the guys worked on building the actual jumps.

Let me set the scene for you. It was about 92 degrees by 9am when we rode our horses, and the humidity was at least 90%. You’ll notice the photo above is a little foggy. That’s because my camera lens and screen were actually fogging over from the heat.

Oh well, we thought. We’ll get this dug out by lunch time. 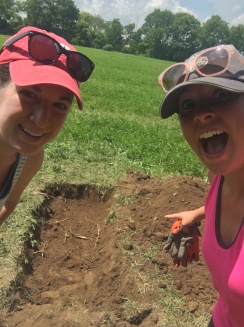 That’s about where we left it around 1pm. The goal: 12′ long by 2’6″ wide by 18″ deep. That is a lot of dirt. We were slowed down by the fact that we only had one useable shovel. The other one was less than helpful, so we picked up another good one when we broke for lunch. That considerably helped the process.

In the afternoon, we actually brought a car over and left the A/C running so we could sit there and cool down every 20 minutes or so. Why did we keep digging? Because eventers are crazy. Also, we decided we were practicing having grit and putting in the work to improve.

We finished the ditch around 5pm.

And then we realized we had to do something with the big pile of dirt we’d created. So we shoveled it all into the Gator and dumped it in the woods. It took 2 big loads. Why we didn’t put it in the Gator or a wheelbarrow directly, I do not know. I guess we just really like moving dirt and sweating.

Meanwhile, the guys had built a beautiful wall. 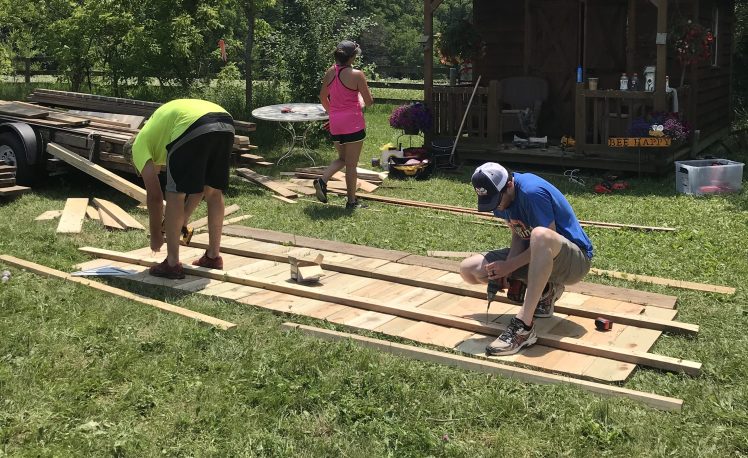 Unfortunately, it happened to be over 5 feet tall. Even in our ditch, it was going to be four feet tall. And, ya know, Advanced Weldon’s Walls are 3’11” so…

They cut it down to a more appropriate size (it’ll end up at about 3′) while us girls were shoveling dirt. And watching these clouds rolling in: 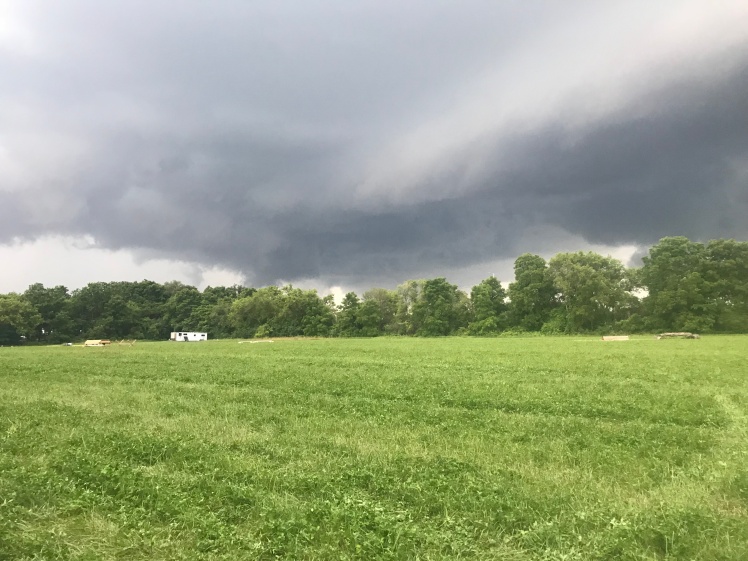 The radar showed two storms that were going to kind of split and go around us, one to the north and one to the south.

The radar is a dirty liar. 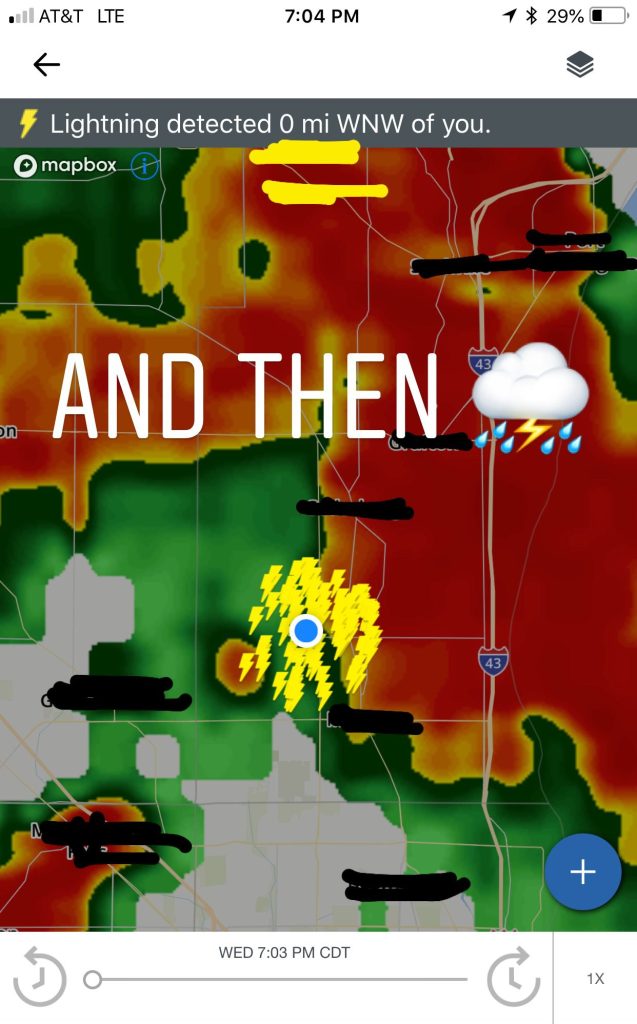 It rained so hard. And lightning-ed and thundered. The barn got hit by lightning while we were standing in it. That was one of the scarier things that’s happened to me. It was possibly the loudest sound I’ve ever heard, combined with the lights flickering out. I practically hit the deck from flinching so hard. I got a nasty Charlie Horse in my arm from throwing them over my head. Yep. I physically dug a hole all day and what gave me a Charlie Horse was lightning.

Eventually, it passed enough that we could go check on our beautiful ditch.

Thankfully it didn’t collapse in all the rain. We brought the wall out and set it up to provide some cover for the next round of storms.

So…not quite a complete Weldon’s Wall but you can imagine what it will look like when it’s done! We still need to frame in the inside of the ditch and pour some gravel down there, and obviously put the wall INSIDE the ditch.

M and I walked our horses out to look at it in better weather yesterday, and both of them were extremely skeptical of the ditch hiding under the wall. I think it’s going to be a great jump to school over once it’s complete. Neither of our horses are bothered by ditches but a ditch plus a jump seems to be a different story.

At some point during our hours of digging, however, we decided that one real ditch would probably be fine. The Trakehner and the coffin complex are going to get mock ditches because we aren’t about to spend two more days digging holes in the damn ground. We’re hopeful that building the rest will be less time-consuming than the Weldon’s Wall. Fingers and toes crossed. It’ll be a lot less physically demanding, that’s for darn sure.

*Both men were actually quite happy to come and build stuff. They got very into it and committed to making the jumps look amazing, which is so awesome! Shoutout to our very supportive SOs!