I had my second dressage lesson recently and it went really well! For the second half, at least. For the first half, I just wasn’t riding great or asking too much.

This was how I rode the first part of the lesson: 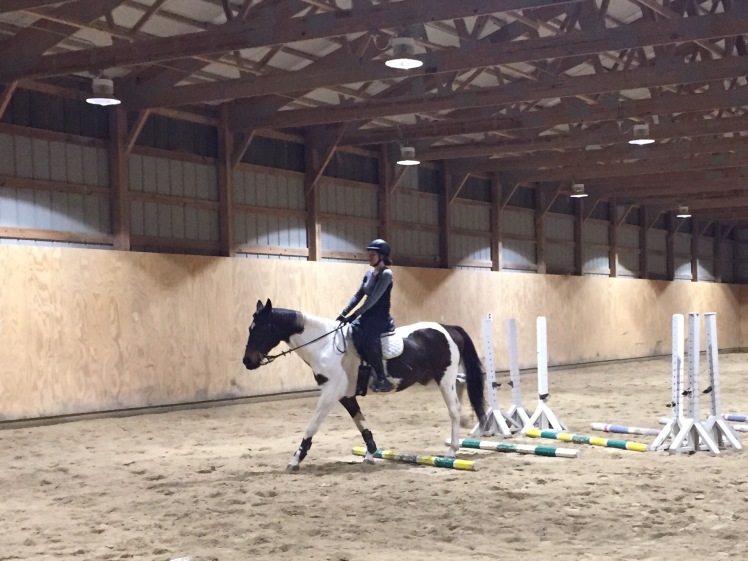 Straight arms. Why? At least I was sitting up straight though.

We were working on quality in the walk and trot, getting the horses to track up and power from behind. Apparently my brain thought this meant I should stick my hands out and ride on a near-loose rein.

Trainer B eventually stopped me and came over to help with Artie a bit. She wanted to see if he could get round and soft on the bit. It took some convincing but once he figured it out, he was nice and light in a frame. It was so much easier to get flexion and bend at that point. Shocking, I know.

I was also given a note to bend my elbows. (Okay, I was given this note a few times but it eventually stuck.) The contact felt firm but not like I was pulling back, and Artie was staying in a nice frame. We progressed to trot and he kept the frame and throughness in the transition and into the trot!

This is how we can ride when we both work a little harder. Bent elbows, strong back, relaxed leg, forward and through. I just wish I were – everybody now! – sitting up a little taller. We even got some nice canter in there, though it was bit tougher for Artie.

For proof, here’s a video of us doing a 20-meter(ish) trot circle. And looking mighty cute, if I say so myself. Although I do wish I were sitting…well, you know.

I believe that someday we can do some dressage. #eventing #dressage #artie #eventingdressage #dutchwarmblood #newbies

I’m finding that I really enjoy dressage. I may even start to love it. (Not as much as jumping though! [Yet. {Probably.}])

What is one small fix you made in your riding that made a big difference?

14 thoughts on “Maybe We Can Dressage”