We pick up the story about Max the weekend after Easter. In the morning, we had a show team meeting to discuss the final show schedule for the summer and who was going to which shows. After the meeting, the 3 of us who are going to the first show of the year stayed to fill out our registration forms with Leanne. This turned into quite the ordeal. We were referencing four different documents: the prize book with the WHJA division definitions, the class list, the day-of schedule of classes, and the actual registration form. Eventually we figured out that it was so confusing because my two divisions listed different fence heights in all 4 documents.

For example, Limit Hunter was listed in the prize book as being 2′-2’3″ for the whole divisions, but on the other documents, some were listed as up to 2’6″. Sometimes, the same exact class was listed with different fence heights on two different documents. SO CONFUSING. Once we figured this out, Leanne decided to get in touch with her contact at the show, and get some answers from the show committee. We broke up the meeting with a tentative plan. A week later we had all finished up registration (though still with some questions pending answers).

This is what it looked like as I finished completing all the forms: 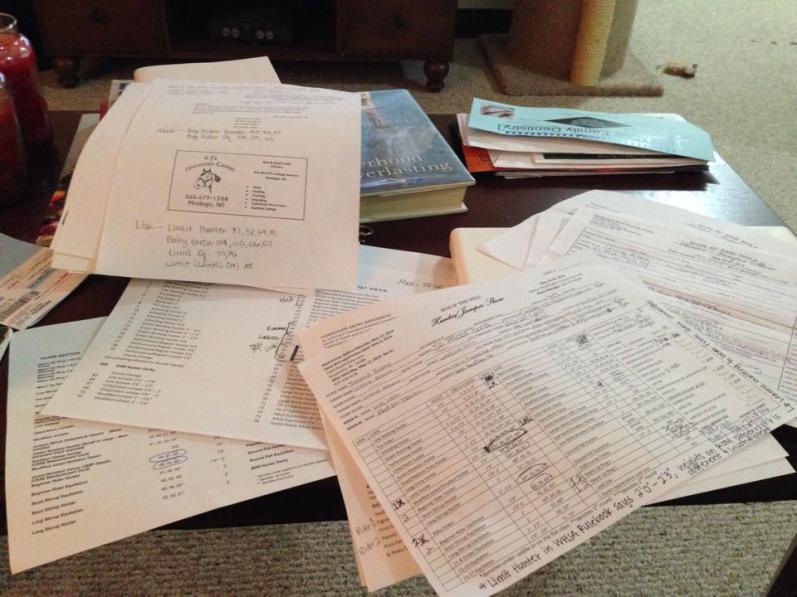 Afterwards, Kimmie and Brenda were each having a 45-minute ride with Brad Hall. Since the clinic was right down the road at Leanne’s sister’s farm, I went along to watch. It was so interesting! Sometimes watching others ride can be just as helpful as actually riding.

There were two main takeaways that I got from watching both rides:

Kimmie rode first, and for the most part, her ride focused on #1. It worked to help Twinkle collect and drive from the hind while still being soft and not bracing against the bridle. They worked a lot on throughness. Wikipedia’s definition of throughness: “When completely through, the horse is soft and elastic, with a connection from back to front, balanced and relaxed.” Essentially, they are responsive to all aids, engaged through the hindquarters, and round through the back. Mad props to Wikipedia for all that info. I was pleasantly surprised, since “throughness” is such a technical equestrian term.

Max and Brenda went next, and they worked on balance and relaxation in the trot. One thing that Brad Hall really  focused on with Max was “not threatening his balance.” He explained that by turning him in tight circles to slow him down, his balance was threatened and only made him more tense and anxious – exactly the opposite of the goal!

Instead, he used the Close Hand, Squeeze Thigh, Stretch Up version of a whoa. And if that didn’t work, he showed Brenda a strategy for Whoa, Dammit that didn’t threaten Max’s balance. It looked like a version of a pulley rein without actually turning. By anchoring the outside rein in the neck and pulling the inside rein, Max would basically run into a wall that caused him to stop pretty darn fast. Brenda only needed to use it a few times, and then Max was much more receptive to Brenda’s half-halts. He became more relaxed, engaged and consistent. It was really, really cool!

The last comment that stuck with me was that you really do need to evaluate each horse’s need when you get on. While the strategy had been to try and keep a loose rein. Throughout Brenda’s ride, it became clear to Brad Hall that Max actually needed a bit more contact. It’s a bit like a security blanket for him; he needs to feel like you’re taking him by the hand and clearly showing him what to do. It was so awesome to watch the transformation in Max and Brenda in just 45 minutes! Plus I took away two very practical pieces of advice for daily riding, and one piece of general knowledge to remember each time I get on a new horse.

That’s part of what I love about riding horses. There’s always more to learn. You can always be better, learn more, experience something new. And each horse is a fresh slate that you have to learn. I think that’s part of why I love horseback riding so much. I can always learn. With other sports, you can use different equipment and have essentially identical results with the same strategies. If you use this basketball or that basketball, you’re going to have the same shots and the same offense with the same results. If I ride this horse or that horse, my strategies and results are going to be totally different. I just love it.

What was the best clinic you rode in or audited?

One thought on “All Go and No Whoa (Part II)”