They say Rolex is the #bestweekendallyear and you guys…it was all that and more, because I brought home the best thing ever: A fiance!

The Scene: Chelsie and I were way out at The Hollow, which is the cross country jump combination that is literally as far away from everything as you can get. While Patrick and Chelsie’s husband, Ryan, went to get sandwiches from the car, Chelsie and I were watching Clark Montgomery and Loughan Glen’s entire trip on the USEF Live Stream (pausing now and then to watch the other riders on course come through The Hollow).

Ryan kept trying to call, and when Chelsie finally answered, he said we needed to meet them by “that big statue” – aka Bruce Davidson, Sr. We argued a bit because it was a super long walk, but he was adamant. So we started the walk back. We ran into some of the girls from my barn and chatted for a few minutes, then noticed Hannah Sue Burnett in the distance and sprinted to the Land Rover water complex to watch her tackle it like the beast she is.

On the way back, Chelsie asked if I was suspicious about them making us walk all that way, but I really did not expect anything.

We finally made it back (poor Patrick was waiting there for half an hour with the ring in his pocket!) and Patrick wanted a photo with me in front of the statue…or so he said. Instead, he got down on one knee and asked me to marry him! 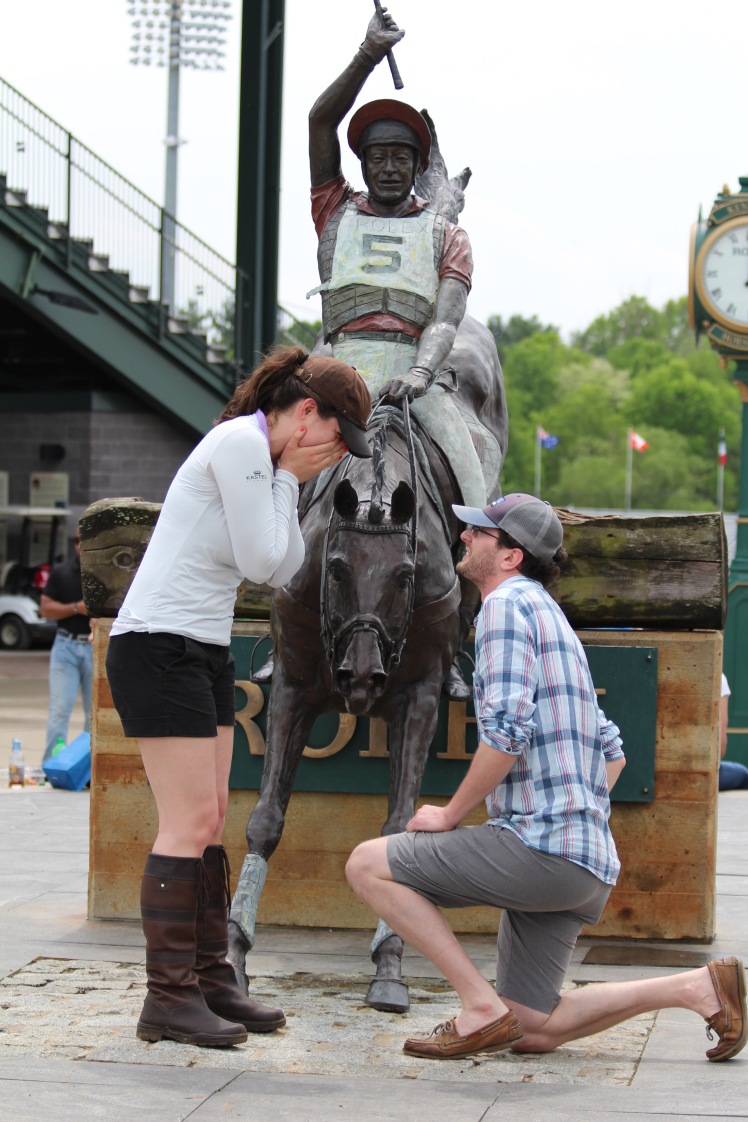 All irritation was erased and I definitely forgave him for dragging us off the cross country course!

Later on we headed over to the Eventing Nation tailgate. Glenn, Jen and Jamie of the Horse Radio Network were there, and we had had dinner with them and some other listeners the previous night. They were so surprised and happy to hear of Patrick’s transition from Horse Boyfriend to Horse Fiance! They actually had us on the show the next morning to tell all about it, which was fun. If you want, you can listen to it here!

I also got to meet Leslie Wylie of Eventing Nation in person and she is every bit as fun as she seems. She also wanted to do a little piece about our engagement story (eeek, I still get a thrill from saying/writing that!). It was fun to chat with her about it and the story on EN is so cute!

It was such a perfect proposal, and definitely something I will never, ever forget. It was even more special to have a group of horse people around us who were so happy and supportive – from Glenn, Jen, Jamie and Leslie, to the other auditors I met (like Celeste, who we walked some of cross country with mere hours before the engagement!) and the strangers who have commented on our story on social media. It has been wonderful and fun and exciting and I still can’t believe it’s really true!

What a lucky person I am, to get to spend the rest of my life with my best friend, biggest supporter and all around best future horse hubby ever.

30 thoughts on “A Very Rolex Proposal”