Middlebury, Vermont, is basically the home of the Morgan horse. Who know? Not me, until I arrived there for a wedding and found an absolutely delightful horsey experience waiting for me.

Stop 1: The National Museum of the Morgan Horse

The museum is located right in town. It’s small but well done. It follows the history of the breed, all the way back to Justin Morgan’s first horse, Figure, who was the founding stallion of the Morgan breed. 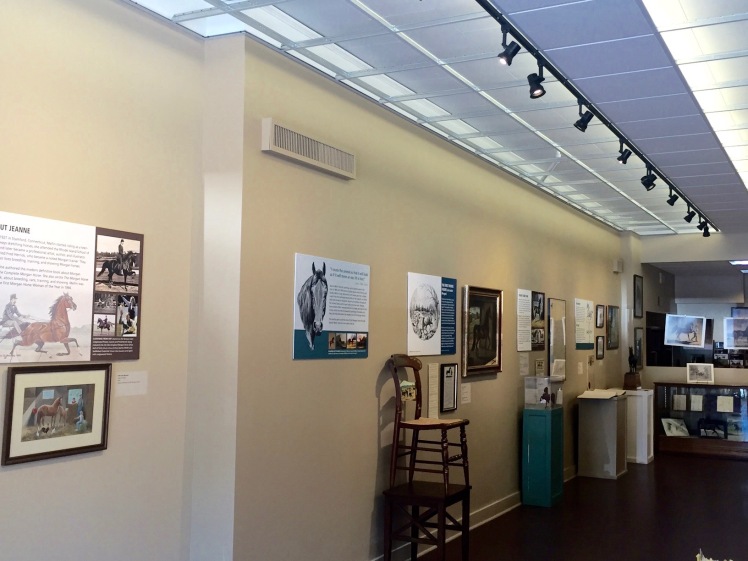 It also includes beautiful artwork by Jeanne Mellin, who wrote The Complete Morgan Horse, which is generally considered the best book on the breed. There are nice displays of antique tack and a short film featuring Mellin as well.

The museum is free and open to the public, though I recommend leaving a donation to help keep it operating for years to come.

I’ll confess: I already knew I wanted to visit the Morgan Horse Farm before we arrived in Vermont. I had done some research and found out that Saturday morning was one of their “Foal Days,” where you can go see the newest crop of foals.

We joined a tour of the facility, which cost $5 per person. I highly recommend it. They give some history on the Morgan breed, and then give a pretty in-depth tour of the barn. The top floor houses the admissions office and some cool displays, as well as the stalls for horses in training, and a separate area where the stallions live. 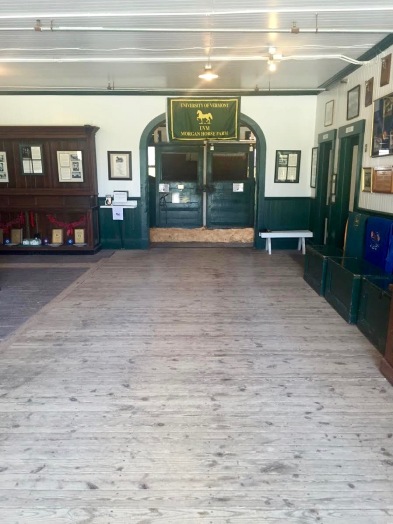 Very stately main area of the barn, where tours begin

Inside the stallion section

A skeleton is displayed in the main area of the barn

Then, we went down a switchback ramp, which they use to bring horses from one floor to the next. It was pretty neat. I wondered how quickly the horses get used to it if they aren’t born on the property, because it was pretty narrow, enclosed and steep!

The lower level houses more stalls, a tack stall and a saddle bay. It was set up in a way that looked very efficient. Our tour guide specifically pointed out that they have a vacuum that they use on the horses; apparently, once the horses are convinced that it’s not going to eat them, they quite like it.

We saw the indoor arena as well. They keep some carts in there, as well as the tease rack and dummy for their breeding program. They breed 8-12 foals each year…and they raffle off one of them! This year’s raffle foal is called UVM Yankee. I suppressed my urge to enter one million times. I don’t have the time or the money for a baby horse in my life right now. But dang, was he cute! 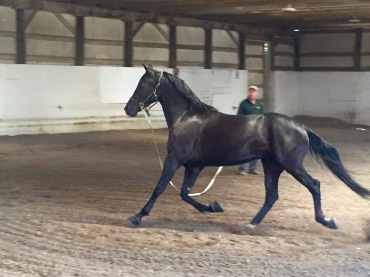 While we were in the arena, a trainer brought in UVM Triumph, a 5-year-old gelding. We got to see him lunged around a bit. Triumph was a little frisky, which seemed to make some of the non-horsey people on our tour understandably nervous.

AND THEN WE GOT TO GO SEE THE BABIES. And I died from the cuteness. They had five of the mamas and babies out in a small pasture where we could go to see them. I was slightly disappointed that we couldn’t go into the pasture, but I understand why they don’t allow that.

But then this little guy came over to say hello, get a scratch on the face and generally slay me with his adorable fuzzy little self:

And then we pretty much just soaked up all the sweetness for awhile. They slept. They ate grass. They rolled around. They were just generally wonderful. 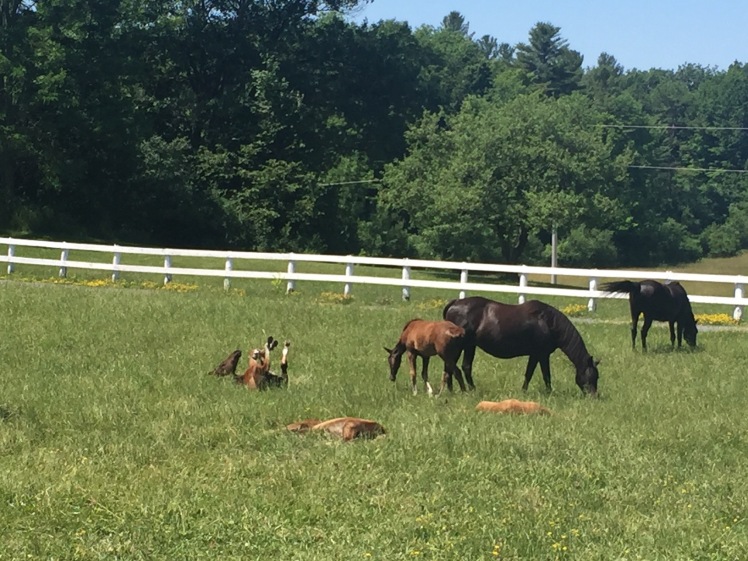 If you are in the area of the museum or the farm, I highly recommend paying both a visit. It was so memorable and fun – a must-do for any horsey visitors!

One thought on “Visiting Vermont: Home of the Morgan Horse”