I knew it was going to be an interesting lesson when I got the following text from Trainer B:

You’ll be on Prada Thursday night. She’s a bitch to tack up so please be careful.

I felt I should clarify what that meant for my own personal safety. Apparently I could expect Prada to both bite and kick while being groomed and tacked, but she would be a beauty to ride.

All I have to say is, thank goodness for crossties. If not for keeping Prada’s head somewhat constrained to a small area, I probably would have one less arm today. And she only threatened to kick like twice so…not bad?

She really was a beauty to ride though – except the two times that I fell off. Well, “fell off” doesn’t really describe it. Twice, Prada slammed on the brakes at the base of a fence, sending my sailing up her neck so my face was practically by her ears. Both times, I managed to end up with my arms and legs wrapped around her neck. And then I could easily put one foot down onto the offending jump and lightly step down to the ground. Let’s call these instances “unplanned dismounts.” Trainer B kept saying I was like a little spider monkey, clinging on like that.

Silver lining: It really helped me remember to sit the eff up. It finally seemed to click that I can keep my butt in the saddle and ride nice and tall alllll the way to the fence. 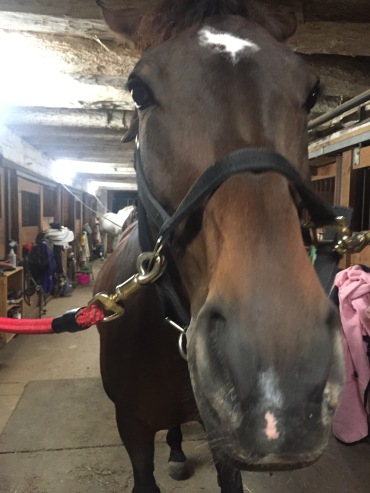 Aw, look at your cute nose! 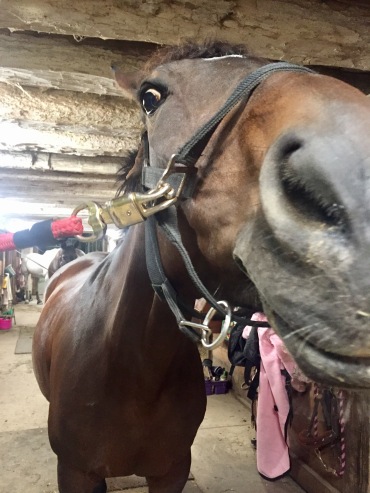 In fact, in my proudest moment of the night, Trainer B told me she used me as an example of stretching tall to the fence while the student I was lessoning with watched. Hooray! Goodbye, forward lean and hunched shoulders! She also mentioned that Kent Farrington does this well and in my head I was like, I’m 100% okay with the fact that you just mentioned Kent Farrington in a positive relation to my own riding. It’s not like he’s amazing or anything, right?

In all seriousness, stretching up through my chest and keeping my shoulders back really did make jumping feel easier, the distances (mostly) came up more clearly and I overall felt more solid than I ever have. Not that I didn’t think I was solid before, I just…didn’t realize what I was missing. Now that I’ve felt it, I think it will be easier to keep that and not go back to being Hunchy McHuncherson (fingers crossed).

Anyway. Even though Prada tried to bite and kick me, and forced two unplanned dismounts, this was one of my favorite lessons. It was super fun and I felt that some important things clicked into place, and I’m feeling less like a floppy sack of potatoes in the saddle. Win!

What less-than-perfect rides have turned out to be great, or helped something “click” for you?

7 thoughts on “Just Call Me “The Spider Monkey””

Leave a Reply to Centered in the Saddle Cancel reply