Wait a second, you haven’t told us what on Earth is Combined Driving?

Combined Driving is a bit like eventing for driving horses. There are three phases, normally done over the course of three days. This particular event was a short format, so all three phases were slightly shorter and completed in one day.

As you can guess from the name, this phase consists of a dressage test…while driving. According to the FEI, this phase tests “obedience, freedom and regularity of motion, and impulsion through a sequence of compulsory movements executed within a designated area or arena.” Just as in ridden dressage, a judge gives marks and comments on each movement.

Loosely, this phase can be compared to the stadium round in eventing. In this phase, drivers must navigate a course of cones with balls perched on top. There are penalties for each ball that gets knocked down. This is extra-challenging because the width of each set of cones is set based on the width of your cart. There is not much space to navigate between the cones! The FEI states that this phase is intended to test the horse’s agility and obedience, as well as the driver’s “skill, accuracy, and precision.” 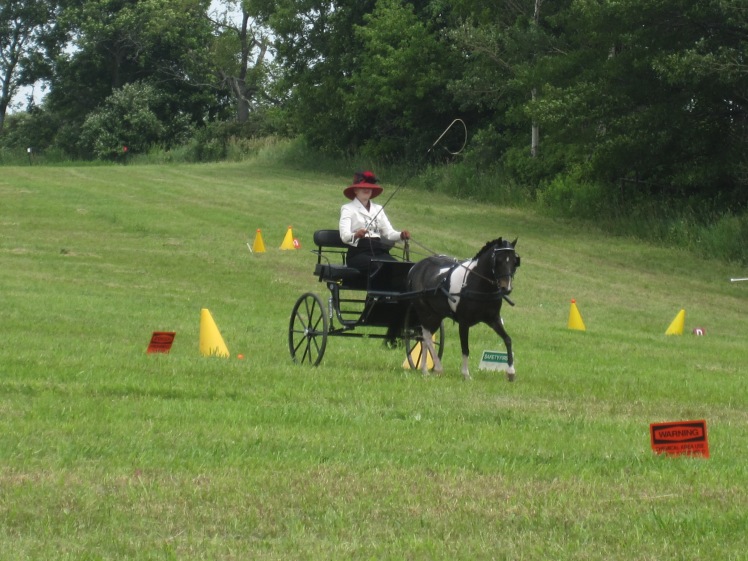 The third phase of Combined Driving is the marathon, which is loosely equated to a cross-country course. In this phase, there are a number of hazards that drivers have to navigate as they pass through a series of “gates” in a particular order. They cannot pass through a later gate before they’ve passed through all the ones before. For example, the gates were labeled A, B and C; therefore a rider would have to go through A and B before passing through any part of C. There’s strategy here as well as sheer speed, which is very exciting to watch!

The FEI states that the marathon phase tests the “horse’s fitness, stamina, agility, and obedience…together with a driver’s accuracy and judgment as they are asked to negotiate an intricate series of hazards which can include water, steep hills, and sharp turns in the fastest time while accumulating the least number of penalties.”

That sounds so fun! So how did Chelsie and Trouble do in the event?

It was such a blast! In Chelsie’s own words, her goal for the event was “to survive” and help build Trouble’s confidence, with a bigger event coming up on the horizon.

Their dressage round was beautiful with just one or two small spooks! The judge had lovely comments in general along with some good practical advice for improvement. Also: they scored a 9 on their overall presentation! I like to think I helped with that just a little because of Trouble’s adorable braids. But really it was all them.

Cones was a lot of fun, too. They had 3 balls down (9 penalties) and came in less than a second over the time allowed. As a spectator, it was fun because I could listen to the timers talking about the round – and it was all positive, about how well they were doing and how cute Trouble is.

Marathon was really cool to watch. There was such a variety of competitors, from single big horses to a miniature horse. There were also several pairs of horses and ponies. No teams of four though. (Yeah. You could do all of this with a team of four horses. Can you imagine?) Marathon was also clearly the most dangerous. Thankfully there were no major incidents, but the presence of a medic and an ambulance just in case made it clear that there was a level of danger. One competitor with a pair of ponies “split” her pair in one of the hazards – meaning one pony went on one side of a tree, and the other went to the other side – which broke the bar between them on her cart. Everyone was fine (except maybe her wallet…that cart is going to need some big repairs!).

Chelsie and Trouble were total rockstars in marathon! They navigated each hazard like total pros and made it in right in the sweet spot in terms of time. Not too fast, not too slow. Overall it was a very successful day! They definitely survived and built up their confidence.

Oh – and a nice 2nd place ribbon didn’t hurt either!

I really encourage you to check out a Combined Driving Event in your area! This is such a little-known sport and it is so cool to watch! We should support the driving community like we do the riding community. And if you want to read more about Combined Driving, visit the FEI website.